The Iron Queen (The Iron Fey Book 3) by Julie Kagawa 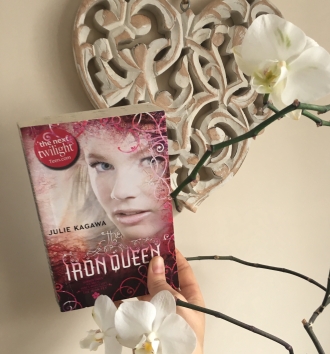 In less than twenty-four hours I’ll be seventeen. Although, technically, I won’t actually be turning seventeen. I’ve been in the Nevernever too long.

When you’re in Faery, you don’t age. So while a year has passed in the real world, agewise I’m probably only a few days older than when I went in. In real life, I’ve changed so much I don’t even recognize myself. MY NAME IS MEGHAN CHASE. I thought it was over. That my time with the fey, the impossible choices I had to make, the sacrifices of those I loved, was behind me. But a storm is approaching, an army of Iron fey that will drag me back, kicking and screaming. Drag me away from the banished prince who’s sworn to stand by my side. Drag me into the core of conflict so powerful, I’m not sure anyone can survive it.

THIS TIME, THERE WILL BE NO TURNING BACK.

I award The Iron Queen 5 stars

This is book 3 of the Iron Fey and my favourite out of the series. Julie’s stories are similar to my own in regards to the retelling of faery tales. The good pace and immediate action, hold the reader captivated from start to end. Her books echo the epic, fantasy element of my own work, which is what interested me in the first place.

Megan Chase is a great character with a strong internal voice that carries us through the book. In this story she learns to fight, wanting to hold her own in battle and not rely on the strength of Ash or her best friend Puck. She also needs to master her powers that are a contradiction to each other, the power of the iron and summer.

What I loved: The banter between Ash and Puck, it kept the obvious rivalry for Megan interesting and not at all tedious. In this novel, Ash and Megan’s relationship is beautifully interwoven into the story. It was the perfect blend of romance in an epic tale. Ash is silent and lethal yet his affection for Megan is genuine. I swooned over this male. Oh my!!

The worlds have an Alice in Wonderland feel. In particular the Trods and Grimalkin, who reminded me of the Cheshire Cat. Grim has realistic animal mannerisms. He exudes the aloof, smugness of a cat. Coming and going as he pleases. (Just like my Jaspurr.)

I loved the unusual and unique realms; they were beautiful and richly described. The premise of the Iron fey is original and a great concept in relation to the whimsical more traditional faery. in myth the fey are afraid of iron, Julie created a world where the iron Fey were born from the growing use of machines. Gremlins and bugs clash with the winter and summer courts, all lurking behind our world, disguised by glamour.

What I disliked: This book is too similar to book 1, The Iron King. The plot and battle are virtually identical down to the settings. Although, I think The Iron Queen is intricate and alluring. The final battle scene was melodramatic and boring. I must admit, I skipped forward a paragraph or two until the event was over.

With that being said, I actually started with book 3 and bought the whole series. That’s how invested I was in the characters and their journey. I was dying to know how Megan and Ash met and what will happen to them. I haven’t read The Iron Knight yet… So many books, so little time.

A fantastic read for fans of faerie fantasy that is firmly rooted in the realm of believably. With great characters and spectacular realms full of magic and wonder. It’s not at all like the Disney Tinkerbell movies. Yes, I’ve watched them all (with my kids).

“Ideas are wilder than memories.”
What’s your perfect place? I’ve got the whole beach to myself. Perfect! 💙
What’s your current read and are you enjoying it?
What is your favourite fantasy romance story?
What book have you been meaning to read, but haven’t yet got around to?
What your favourite duology?
Follow Lorraine Ambers on WordPress.com

“Ideas are wilder than memories.”
What’s your perfect place? I’ve got the whole beach to myself. Perfect! 💙
What’s your current read and are you enjoying it?
What is your favourite fantasy romance story?
What book have you been meaning to read, but haven’t yet got around to?
What your favourite duology?
Loading Comments...
%d bloggers like this: